Day One of the Tour DaVita “Ride of a Lifetime”: I usually joke about this because I don’t really see how each Tour can be *the* “Ride of a Lifetime” – I mean, I’ve done 6 of them. Each is unique, but I can’t say that each year’s Ride is more awesome than all the previous ones… We (Toni and I) missed the inaugural Ride, in Alabama and Tennessee, because we didn’t know about it. I didn’t ride in Wisconsin because it wasn’t open to family members, or else we signed me up too late to qualify. In Michigan I remember one BIG hill, and the Silver Lake Sand Dunes. In Washington, it was the cold, hard, driving, nasty, unending rain. In Massachusetts/New York/Connecticut, it was the never-ending up-and-down on the hills – with a stop sign at the bottom OF EACH ONE. In Iowa, it was the cold front that moved through, along with the hills and the endless climbs with no corresponding downhills. In South Carolina, it was the heat and humidity. This year it was my lack of training.

The day’s ride was a loop, so at least I knew that I would come back down every foot of elevation I went up. Conversely, I also had to regain every foot I lost along the way – funny how that works out. We had the usual mass start at 8 AM, with all 550 or so of us trying not to fall, or knock anyone else down, or do anything else really stupid. This picture is after about 15 – 20 minutes of riding, when the riders have started spreading out according to riding speed and ability. 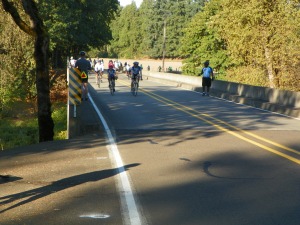 This one is at the top of the Foster Lake dam, which was the highest point in our ride (I think). Everyone stopped for a breather and to enjoy the view. 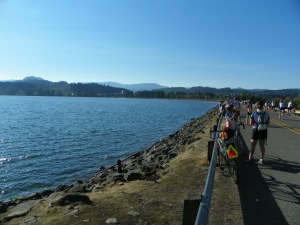 I had already told Eve and Rick that they should ride at their own speed and I’d ride at my speed, and I’d see them at the end of the day. I actually saw them several times during the day – usually as they were leaving whatever rest stop I was arriving at. Lunch *did* overlap a bit, but they left before I finished my meal. And then I compounded the time difference by having a 40-minute nap after lunch! I never would have finished the ride without it.

I *could* use the excuse that the first half of the ride was harder than the second half, but the fact is that I was just exhausted after 38 miles, and I didn’t think the ride was all that difficult. I just didn’t train sufficiently this year.

As usual, the food was excellent and plentiful. In the early years (through Michigan, at least, and maybe also in Washington), Backroads cooked all the meals – mostly in Dutch Ovens! But with 500 to 600 riders, and all the associated support crew, to feed, that became impractical, so now they contract with a national caterer based in Denver. Their food is way good, and locally-sourced as much as possible. TDV also attempts to keep as much waste out of local landfills as possible. To do that, they have many locations where you can deposit recycleables (cans and plastic bottles) and compostables (food leftovers, plus compostable eating utensils and plates). Then there’s the remainder – the inevitable candy bar wrappers and stuff. But over 80% of all our waste is kept out of the landfills, so we minimize our impact as much as possible.

And, of course, there are the friends to catch up with. Toni made friends wherever she went, which is one reason I continue to do TDV – everyone expects to see me there. I would name them, but I’d inevitably miss someone who would then feel left out, so I’ll just say Thank You! to everyone who makes me feel welcome. You know who you are. 🙂

The Sunday night after-dinner program included an open-mic session, with participants invited to answer the question “Why do you ride?” There were many heartfelt and heart-warming stories that night, and I shared mine. I related how Toni had ridden in Wisconsin (and how I was the stalker in the little red car – people still remember that), and how we had ridden in Michigan, Washington, New England, and Iowa. I said that last year I had specifically ridden in South Carolina to honor her memory, and that I was riding this year to continue the legacy she started. Apparently, the video crew liked my story so much that part of it was included in the closing-night wrap-up video, which you can see on the TDV website’s home page: https://www.tourdavita.org/. The whole video is almost 12 minutes, but I think you’ll enjoy it all.

At the end of the day, we all collapsed into our sleeping bags and slept the sleep of the dead. Or at least I did.