The weather in Astoria was gorgeous on the 22nd. Ali and I woke, dressed, packed, and found a place for breakfast right on the Columbia River. Our first stop after eating would be the Astoria Column, built in 1925/26.

There is a 164-step circular staircase inside that you can climb to reach the observation deck at the top. During one of the renovations, each of the steps was “bought” by donations to the project, and the steps’ “owners” are listed at the landings. This plaque at the bottom gives some additional information: 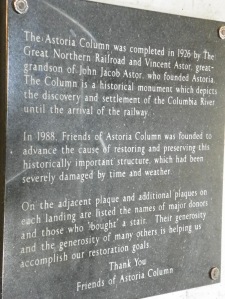 The mural on the exterior is one long panel, but I didn’t walk around and around (and around and around and…) to see the whole thing because I knew I would get dizzy / fall over something / trip on something / bump into something / all of the above. I was mildly disappointed that there wasn’t a rendition of it in the gift shop – maybe I should suggest that they create one. Parking is $2, but that’s per year – so if I decide to go back there in the next few months, I can park for free. From the top, you have an unobstructed, 360-degree view of the area.

After leaving the Column, we found our way to US 101 and turned south toward California. It would take us the rest of the day to get there, due to the leisurely speed limits, the views along the way

and, of course, Tillamook!

I actually almost missed this sign, because the last sign I had seen for Tillamook, the town, had said it was about five miles further down the road, and then I saw a car parts store (?) / RV store (?) / junkyard (?) – something, anyway, on the other side of the street from this sign, that had a VW bug / camper conversion perched up on a pole. In fact, if you look carefully at the right side of this picture, you can see it in the background. (I can’t help it – I’m a gearhead.) But I *did* see the sign, and we *did* go through the self-guided tour, and it *was* worthwhile. There’s a little bit about the history of the co-op, and then you go to the upstairs level and watch them cutting 40-lb blocks of cheese (it was cheddar when we were there) into smaller sizes and then the smaller blocks being sorted, graded, wrapped, sealed, and sent off for shipment. At the end of the tour, there’s an area with free samples (can’t imagine why), followed by a dairy case-filled room full of cheese for purchase. Imagine that. I tried several cheeses in the sampling room and liked them all (and bought several), but the one that *really* got my attention was a smoked cheddar. I haven’t had any of my little hoard of it yet, but I can *still* taste it. YUM!

Another thing that is YUM! is their ice cream. They make quite a variety of flavors, and being the decisive person that I am, I had the five-flavor sampler. The only flavor I remember – even after looking at the list on their website just now (7 PM MST 10/7/14) – is the blueberry. OH. MY. GAWD. If I had had two electric coolers, I’d have set one of them to “freezer” and brought some home with me! The flavor was rich, the ice cream was creamy, and the blueberries (yes, there were actual blueberries in it!) tasted fresh and had a fresh texture – not frozen at all! I think Tillamook has become a permanent stop on my list any time I’m within range. [Now all I have to do is define “within range.”]

After our tour and snack, Ali and I again turned south on US 101 and drove down to Crescent City, CA, where we arrived after dark – again – and stayed the night.