Evolution versus Creation – my thoughts 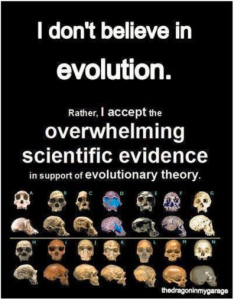 I posted this graphic on my Facebook page recently and noted that “accepting the evidence for it” is probably a more accurate way than “believing in it” to describe my position on evolution. One of the comments it engendered was “Yes, you must be politically correct.” My response was, “It’s not ‘politically correct;’ it’s the accurate way to describe it. In the same way, I neither believe nor disbelieve in gravity. I accept that it’s there. No ‘belief’ is required.” This led to another person posting this comment: “I don’t remember seeing evidence of one kind developing into a separate kind.”

So I Googled “evidence for evolution” and the search came back with “about 415,000,000” results. Not having the time to review all these myself, I looked at the following (all on the first screen):

The Smithsonian Institution has this article on human evolution. In it, they list several lines of inquiry that all point to homo sapiens sapiens having evolved from another species. Among them are behavior, genetics, and the dating of samples.

The New England Complex Systems Institute has this page. It lists and describes five different types of evidence for evolution: ancient organism remains, fossil layers, similarities among organisms alive today, similarities in DNA, and similarities of embryos. They also mention a sixth type of evidence: artificial selection, or breeding.

Finally (for this post, anyway), the University of California, Berkeley, has a whole host of resources identifying lines of evidence in support of evolution.

Then I Googled “evidence for creationism” and the search came back with “about 767,000” results. Again, I looked at what came up on the first screen:

The Institute for Creation Research has this page that outlines the evidence for creationism versus evolution.

Another website, CreationSciencetoday.com, is wholly devoted to the topic.

A third site, the Creation Education Center, posed this as one of their “Questions of the Month:” Is there any scientific evidence for creation?

By the time I got to the third page of results, entries were already appearing against creationism – including this one in 2002 from Scientific American.

Let me state right here that I am not trying to convince anyone, on either side of this question, that the other side is correct. I’m only relaying what I found so that I can more clearly explain my own conclusions.

We’ve seen, time and again, that science is not infallible. Instead, it is a robust system of “try, fail, adjust” as necessary. Our understanding of the world changes as new information becomes available to us. For example, classical mechanics (Newtonian physics) was superseded by Einsteinian relativity and quantum mechanics, both of which explain the universe much more accurately. (A side note here: In the December issue of Discover magazine, there was an article describing the possibility of quantum mechanical effects on DNA, where a hydrogen atom could exist at both ends of a bond between the two strands simultaneously until it’s “observed,” at which time it collapsed to either one end or the other – and it didn’t seem to collapse with equal probability to both ends. It “chose” one end more often than the other, leading to a specific mutation in that gene.) While there are still many mysteries that science has not solved, it is not necessarily the case that they will *never be* solved.

Creationism, on the other hand, is not readily open to modification and adjustment, because it relies on the action of an external, infallible being. Since these actions cannot be tested or verified, they must be accepted on faith. Accepting answers on faith (again, to oversimplify) constitutes religion, at least to me.

The problem I have with this is that I’m supposed to accept “How,” “When,” and “What” on faith, in addition to “Why.” The scientific method is very good at answering “How,” “When,” and “What,” and it’s not afraid to revise its answers when a better one comes along. It doesn’t do well on “Why” questions, though, and that is where I think religion, or perhaps spirituality, has its strength.

So on the question of evolution versus creationism, for me, the scientific-inquiry method has presented its case way better than creationism. The picture isn’t complete, and may never be, but enough pieces have been found and fitted together to give me confidence in the correctness of the scientific description of evolution. (Thus I “accept the evidence for” instead of “believe in” evolution.) The creationist, or intelligent-design, method, fails miserably for me, because all I can see it saying is, “It’s true because we believe it’s true.” And that leaves me … nowhere.

3 Comments on “Evolution versus Creation – my thoughts”