Several months ago, I got a letter from the Donor Network of Arizona (DNA) inviting me to become a volunteer with them. I think the idea was that they had supported me through two years of my grief journey and now it was time to pay them back – or to pay it forward, as the case may be.

I decided that volunteering with/for them would be a good way to remember Toni, so I sent in my volunteer application and was told to attend the training session that took place last Thursday, which I did.

The “training,” if you want to call it that, was more like an orientation. (Actual hands-on training will occur OJT-style at events.) There were five people there – the trainer, two transplant recipients, one potential recipient, and me. Apparently this was mildly unusual; I guess that a lot of volunteers don’t have the personal connections to organ donation that we all had. This isn’t a bad thing, mind you – volunteers don’t have to have personal experience with the process. It was just unusual that all of us *were* already involved in one way or another.

We each received the standard packet of handouts, and the trainer went through them with us. Although I took some notes, the trainer mostly just read what was already on the handouts. Here are some of the things I learned:

So there you have it. I’m an official (?) volunteer with DNA – complete with the latest t-shirt – and I’m waiting for an email listing opportunities to “strut my stuff.” The t-shirt’s actually kind of cool: 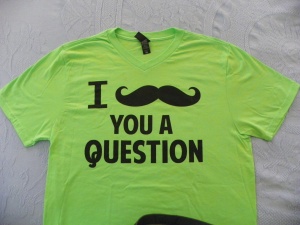 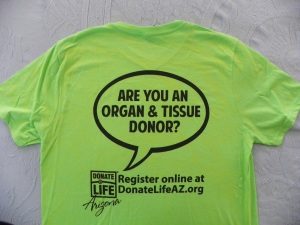