Hello, and welcome to Day 3 of the reunion saga. In previous episodes we discovered that my reunion started in Chicago; that I can easily order too much food for a group; that the weather will be at its worst at the worst possible time (think about it – it actually makes sense); and that we love watching Drill Team and Honor Guard videos.

Sunday (Mar 29) was a mixed-bag sort of day for me. The weather had warmed back up to its seasonal mid-40-degree highs, but I started having symptoms of a cold. Also, I was privileged to watch the Honor Guard’s Spring Semester candidate class practice the Posting Colors ceremony, so they could properly perform it at the upcoming Air Force Ball (which will take place during Blue White Weekend in a couple of weeks).

While I was passing time until the training session (it began at 4 PM), I wandered around campus some more and ended up in the Pegula Ice Arena. It’s a fantastic facility that has helped PSU become Hockey Valley in the wintertime. I wandered in to watch whatever was happening, and found a children’s skating class on one side and a pint-size hockey game on the other. The class was on training ice, and as I wandered around the outside of the rink, I noticed that the doors to the Zamboni room were open. As I stood there looking, someone said, “Come on in and look around!” So I did. I didn’t actually *touch* anything, but I noticed that the Zambonis have studded tires and chrome wheels (nice touch). Two of them are electric; the third runs on propane. The bin where they dump the “snow” (that’s what the shaved-off ice is called) is actually heated to about 80 degrees to speed the melting – otherwise, during a game, the bin could easily fill to overflowing. I also found out that the rink ice is typically about an inch to an inch and a half thick; my new friend told me that when the lines get blurry (as they were in the practice rink), the ice is probably 2 or 3 inches thick and needs to be cut down some. I learned that when they replace the ice (as opposed to shaving it and laying down a new film with the Zambonis), they use hot water. This is primarily to help get any air bubbles out of the water before it freezes, so the ice is more solid and a better surface to play on. (I could go on and on, but suffice to say I learned a lot about the behind-the-scenes work in a hockey arena.)

These two photos are of the main rink in the Arena. There was a junior-league game going on; you can see how small some of the players are compared to the referees. 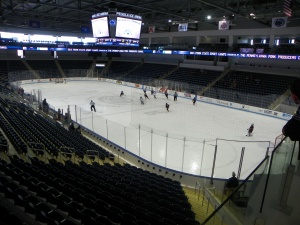 When it came time to leave, I walked over to Wagner Building in anticipation of seeing some of the reunion attendees there waiting for me – or coming shortly to join me – for our time with the Honor Guard candidates. To my surprise, Col. McFeely was the only one who showed up, and I think he was there more as the PAS than as an alum. We watched the session for about a half hour, during which I met the current Honor Guard Commander (they change command every semester) and had a chance to renew my acquaintance with last fall’s Commander (who is also one of the trainers for the candidates). The training session was to continue to about 6:30, so after a half hour Col. McFeely said he had to leave and suggested we both go.

I enjoyed watching the session. I found myself trying (and failing) to remember what-all I was taught when I pledged the DT back in 1969. I know we didn’t do much, if any, with the spit-and-polish types of ceremonies the Honor Guard does today. A lot of that was because of the different environment on campus in the late ’60s and early ’70s, but I think also that the DT simply hadn’t evolved beyond being a competition-oriented drill unit. If I were in college today and in ROTC, I would definitely want to join the Honor Guard. I don’t know if they’d want *me*, but I’d try out.