Family History – Up Close and Personal

Last October I wrote about my family “Ances-Trees” and what I found out about my family through Ancestry.com. I had already known some of the history, of course, but it was fun to find unknown relatives and branches of the genealogical tree.

This past Wednesday, as part of my leave-taking from Eve and Rick, we three rode / drove [Rick and I rode our bikes; Eve drove her car because of a bruise on her back that made it uncomfortable to ride on the V-Star] north from their home in Round Lake to Fond du Lac, WI. Fond du Lac sits at the foot of Lake Winnebago and is a respectable town/city. My paternal grandmother lived there most of her life, and is buried in the Rienzi Cemetery – along with *her* grandfather, Edward S. Bragg.

Edward Bragg was a General in the Union Army during the Civil War and commanded Wisconsin’s Iron Brigade. After the war, he returned to Fond du Lac. He served in the House of Representatives from two Wisconsin districts and was appointed Consul-General to Cuba by Teddy Roosevelt. He also served in other diplomatic posts, to Mexico and Hong Kong.

Today, Fond du Lac has a historical “village” that was built up around the Galloway Mansion (which was originally on a farm fairly far outside of town). One of the village’s buildings includes a law office that I thought was a replica of General Bragg’s, but if it was such the last time I was there (in 2002, I think, with Eve), it isn’t any more. There’s still a replica law office, but it’s not his. There is an exhibit case in the museum building that is dedicated to him, though, and includes a timeline of his life’s major events, Daguerreotypes of him and his wife (both at age 17), and a photo of him as a distinguished elder gentleman.

When we signed the guest register, the docent asked why we were there, and Eve replied, “Family history.” When I volunteered the fact that General Bragg was my great-great-grandfather, they got all excited that a family member had come to see the place, and they gave us a very complete tour of the entire village. I took about 180 pictures, mostly of the Galloway House, but also of the carriage house and other buildings – none of which Eve and I had seen on our previous visit.

After we toured the village and the museum, we drove/rode out to Rienzi Cemetery so I could show Eve and Rick the General’s grave, but I couldn’t find it. I totally misremembered where it was and got myself thoroughly lost riding around on the roads in the cemetery. So after a short search, I admitted defeat and we left (it was after the cemetery office had closed for the day, or I would have gone there and asked for directions). We gassed up and then parted ways at US 45, as I headed north to Michigan and they turned south toward home.

The following pictures are a small selection of the ones I took at the village. 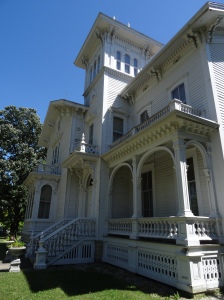 This model shows how the house evolved over a period of time, from a simple cabin (a) to a huge mansion 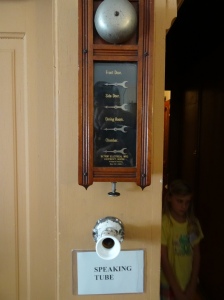 Very advanced: The speaking tube was the era’s intercom system; the doorbell indicator let occupants know which doorbell had been rung

Daguerreotypes of Gen. Bragg and his wife, both at age 17

I didn’t make it to Bessemer, MI that night. I had hoped to get that far so I wouldn’t have too long a ride to International Falls, MN, the next day, but when I got to Antigo I realized I would have to be riding in the dark and it would be too late to go any farther. Additionally, it had been really windy all day and the fatigue of fighting the (non-self-inflicted) wind had caught up to me. So I stayed in Antigo.