In this episode, we catch up with our Peripatetic Traveler as he leaves Wisconsin and travels through parts of Michigan, Minnesota and North Dakota to the bustling metropolis of Hankinson, where he stayed overnight in a city-park campground.

As I stated in my last post, I stayed in Antigo, WI, the night of 7/29. It ended up being a good-luck-bad-luck situation, in that the good luck was that I found a room at the third motel I tried (it was a local one – the first two, which were chain motels, were full) and didn’t have to ride in the sudden thundershower; the bad luck was that the rain fell while I was checking in so my stuff got wet (the tank bag and my saddlebags weren’t protected by their rain covers). But since it was a brief shower, they didn’t get *too* wet, and everything dried out overnight.

A good night’s rest helped a lot, so I was able to make some good mileage on 7/31. The other factors in making good time were the higher speed limits in the rural areas, and fewer towns to have to slow down to go through. My gas mileage went down, but my odometer kept on rolling. The thirty-first saw me complete my longest-ever single-day ride, at 428.1 miles. I rode from Antigo up US 45 to Michigan and US 2. I took 2 west, back through Wisconsin, to Duluth, MN, where I picked up US 53 and rode it all the way in to International Falls. 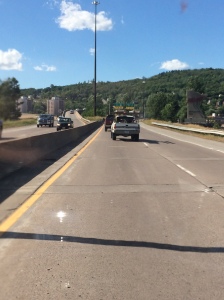 Along the way, I got my first (and last, for a while) glimpse of a part of Lake Superior. This was just at the tail-end of a heavy rainstorm that I had ridden through.

Poofy clouds, blue skies,and lotsa trees – not at all like home

I spent some time that night, looking at both the Minnesota map I had and some random flyers and brochures that I had gotten in the motel’s lobby and trying to figure out what I wanted to do on my way south and west the next day. I finally settled on a drive-through of Voyageurs National Park and a visit to a museum in town.

So on the 31st, after I packed and stacked the Honda and left the motel, I rode east on MN 11 to the park entrance: 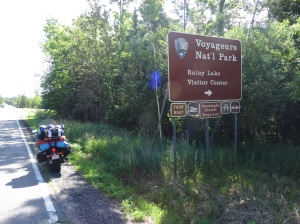 I didn’t go in, though, because 11 ends a few miles east of the entrance, on an island, and I wanted to see that first. So I rode out to the end of 11 (and passed 12,000 miles on the bike, too!) and then back. But somehow I missed the park entrance completely on the return ride, and ended up back in International Falls. Then I found one of the museums (there are several in the same area) – it is a Bronko Nagurski museum, which I decided to skip – but not the others. So, my plans being completely shot, I left town and headed southwest.

But one of the “flyers” from the motel’s lobby had been a map of scenic byways, so I had planned out a route from International Falls to Hankinson, ND, along some of those. While it was a slower ride, there was a lot less traffic and the roads were great, and I saw more hours of sun, poofy clouds, blue sky, and TREES. And wind. [Well, I didn’t *see* the wind, exactly, but I sure felt the effects of it – for the third day!]

I hadn’t really been sure whether I was going to camp last night or not. I looked through my camping directories, and identified a few possible towns where I *could* camp, but I left open the possibility that I might be getting somewhere too late to set up before dark. It turned out that I got to Hankinson with plenty of sunlight left, so I spent eight whole dollars and camped next to the city park.

This is what Minnesota (and North Dakota and South Dakota, too, come to think of it) looks like: 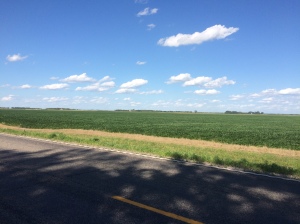 Learning to count on the Honda

So this installment leaves me staying in a campground in Hankinson, ND. There’s more to come, but I don’t like to make any single post too long – I know how short your attention span is for Internet stuff (I know because mine is short, too!). Stay tuned.

Oh, one last note: On the way north through Minnesota in US 53, there was a sign saying “Laurentian Divide.” It took me a while to puzzle it out, but I finally decided that this divide must be like the Great Continental Divide, only it separates the waters flowing to the Atlantic from those flowing north to the Arctic. And I was right. Most of the US lies south of this Divide, so it’s unlikely most of us will ever see the sign. But some lucky few of us actually live in a place where the water flows north to the Arctic.