I hate it when reality rears its ugly head. After a day of bliss on the Cumbres & Toltec Scenic Railroad (C&TS), I had to put some serious miles on the Honda in order to get home by the 16th. In spite of that, I still managed a couple of scenic stops between Antonito, CO, and Chinle, AZ.

First, we have two passes on CO 17 before riding into New Mexico. Unlike the C&TS, the road doesn’t swing between states before finally becoming NM 17 somewhere north of Chama. Most of the road is one valley north of the C&TS, so I had to cross over La Manga Pass before I even saw the C&TS tracks: 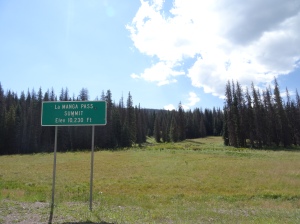 And then I followed the C&TS up over Cumbres Pass:

I got lucky with my timing, too – I left Antonito at 10 AM, just as the westbound train was pulling out, and I was headed downhill on 17 around 11 AM, just as the eastbound train was approaching its third crossing of the road. Naturally, I had to stop and get the “outsider’s” perspective (as opposed to the “insider’s” view I had had all day yesterday) as it pulled the grade and crossed the road. You can see the video here.

After I was done with the trains, I motored down into Chama and visited the C&TS yard. It was very quiet, with nobody around, so I just wandered for a while. There is a museum car on a siding, which has a couple of exhibits; there are other cars on other sidings (including a U. S. Mail car), in all stages of (dis)repair; there is the stationhouse, where you can buy tickets for the train; and of course there is the souvenir store. One of the items for sale was a beautiful marble mosaic wall piece (with a matching table if you wanted it). I was tempted, but couldn’t figure out how I was going to load it on the Honda. (That’s my story and I’m sticking to it.)

I could have hung around the railyard all day, just to see the westbound train arrive, but I didn’t have time. So, reluctantly, I got back on the Honda and motored westward. I followed a northern option, which put me back into Colorado and through Durango, before finally heading southwest to Four Corners. As I rode westward, the world visibly dried out and became more like the Southwest Desert I know and love:

Northern NM, about equally-distant from AZ and TX

The Four Corners Monument is on Native American land and therefore is subject to their rules. They don’t accept any of the National Park or multi-agency passes, so I actually had to *pay* (gasp!) to get in. The Monument’s plaza is quite nicely done, but the surrounding grounds are totally bare. There’s a dirt parking lot and that’s pretty much it, which is kinda disappointing. Nonetheless, I went in and snapped the requisite photos:

Four Corners from the Arizona quadrant

Looka me! I’m standing in four states all at once!

Just shortly after leaving the Monument, I rode back into Arizona. Although I had several more hours of riding, and another whole day of riding tomorrow, it was good to be “home”!

I followed US 160 west to US 191, and then turned south to get as far as I could before I ran out of steam or daylight. I had to stop once for fuel, and once to suit up against a HUGE thunderstorm (that I managed to avoid because of the various turns in the road), but other than that it was just mile after mile of … mile after mile. I knew there were places to stay in Chinle (’cause that’s where Canyon de Chelly National Monument is located), so that was my first goal. If things were going well, I considered continuing to St. Johns – but by the time I got to Chinle I knew I was done for the day. I found a Best Western for the night, had a Subway sub for dinner, and ended the day.