I’m still cleaning off my desk. With tonight’s post, I’ll be able to get one more piece of paper off it and into the trash. YAY!

Last year I wrote a post called “Little Bits” in which I wrote briefly about US routes “following” me as I traveled. I specifically mentioned US 60 because I grew up along that highway in Richmond and it also runs through Phoenix. One of my bucket-list entries is to someday drive (or ride) it end to end.

I mention this because 60 popped up this past summer, during the Historic Route 66 part of my ride. I had already followed some of it to get from Tucson to Holbrook, but I didn’t know that I would see it again in Missouri. For a surprisingly long stretch, 60 and 66 were the same physical road. I felt good about that, because it meant that I would have a second chance to visit some of the “roadside attractions” on 66 that I didn’t have time for. So I’m looking forward to that stretch of 60/66 whenever I get to that particular journey.

I also ran across other familiar US routes from last year. US 30, which I drove for many miles in Indiana, popped up under my wheels in Wyoming. And US 12, which isn’t that far from Eve and Rick’s house in Illinois, also runs west through South Dakota. While I didn’t ride much of it, I did see the signs and I think I crossed it a couple of times.

And then there’s the burning question to which everyone wants the answer: What, exactly, does “Road Closed” mean? It can mean any number of things. For example, a little bit east of Holbrook, AZ, I found an old Route 66 bridge not too far away from the I-40 bridges. When I investigated, there was a “Road Closed” sign, and on closer inspection, it certainly looked like the road should be closed. But as the picture shows, people still use the bridge on a regular basis, although the far end is just a dirt road now.

For another example, in Missouri I saw a sign that said “Road Closed 3 Miles Ahead.” Since this was part of Historic Route 66, and I wanted to ride as much of the actual pavement as possible, I decided to check it out and see why it was closed. Was there construction? Did the road end? Nope, and nope. This is what I found:

The road (bridge) is still there, but you ain’t going on it!

My guess is that the bridge had been deemed structurally unsafe, but rather than repair / replace it, or tear it down, they just put a barrier across. At another place, I don’t remember whether there was a sign, but if there wasn’t there certainly should have been (although the boulders that were placed in the roadway were just as effective):

So far, we’ve seen “Closed – but not really,” “Still there – but you can’t get to it,” and “Road all gone.” Are there other interpretations for “Road Closed?” Yep.

Sometimes it means “Closed for now, but we’ll reopen it – eventually.” In Illinois, where parts of Historic 66 are actually still quite heavily used, I found this: 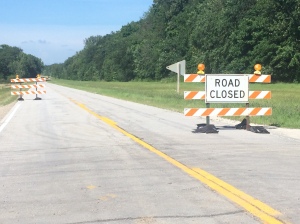 Naturally, I had to explore:

…physically accessible, that is, up to a point.

So eventually the project (in this case, a new bridge, I think) will be done and the road reopened. I also found an instance of “Closed to everything some of the time; closed to vehicles most of the time, but sometimes open to vehicles for special occasions.” This was at the Old Chain of Rocks Bridge, where Historic 66 originally crossed the Mississippi at St. Louis. 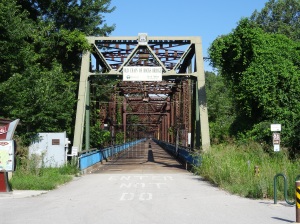 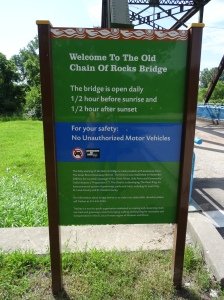 There were also instances of “We’re abandoning this section of roadway because we don’t need four lanes here any more. To make our abandonment legal, we’ll put up signs and piles of dirt at each end of the section, but we’ll leave the intervening crossover pavement in place so if you really want to, you can go on this old road. But you’re on your own if something happens.” (I didn’t get a photo of that.) I also found “We don’t need four lanes here any more, so we’ll rip up enough to make it useless and then let the rest slowly disappear.” 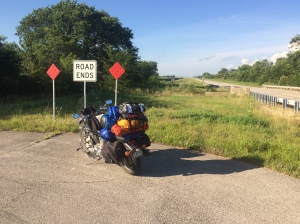 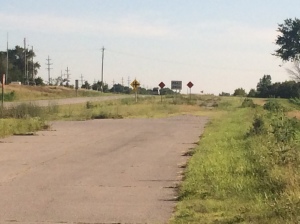 The reverse was also true: “We’ll pull up everything except the bridges and leave them here for the people to wonder about hundreds of years from now.”

I also found a section of Historic 66 in Arizona where it wasn’t closed in one direction (which happened to be the direction I started from) but *was* closed in the other (where I came out). If I had been traveling west, I would have seen the “Closed” (or “Private Property”) sign and wouldn’t have been able to ride that piece.

And finally, although I again didn’t take a photo, I saw places where even the bridges had been removed. This left sudden dropoffs along the old roadway alignment, which could be dangerous to people riding dirt bikes or ATVs or whatever along where the road used to be. So the state transportation department would have to put up “Road Closed” signs and barricades – on a NONEXISTENT road – to say, “NO, we really mean it! The road is CLOSED. As in, GONE. VANISHED.”

In summary, then, “Road Closed” can mean any of a number of things. If you have the time when you next see a “Road Closed” sign, and it doesn’t look particularly dangerous, go see *why* it’s closed. You never know what you might find.