Moab, the Green River, and Canoes (Part One)

Time for another adventure! Actually, it’s past time, because I left Tucson, adventured for more than a week, and came back already. *sigh*

This trip took me back to Moab, Utah. My first visit there was for the 1999 Easter Jeep Safari; although I haven’t been back to go Jeeping again, I have paddled the Green River several times since then. In fact, this year’s trip was my 7th in eight years (I skipped 2014).

I left Tucson on Thursday, September 24, for the 11-hour trip. My daughter, Eve, and her husband, Rick, had left Chicagoland the day before and were driving straight through to Moab. [I have no idea how they can do this, but it’s their preferred method of traveling.] As it turned out, they arrived in Moab a few hours before I did and spent some time walking Main Street (aka US 191, a major north-south route through Utah and Arizona).

The drive from Tucson to Moab is a beautiful one, especially once you get past Flagstaff and onto the Navajo Nation. It’s a special kind of beauty, encompassing buttes, bluffs, mesas, HUGE uplifts, and, of course, Monument Valley. This photo is of the bluffs just west of the San Juan River, shortly after entering Utah (the gash in the landscape about 40% of the way down from the top of the photo is the river itself). 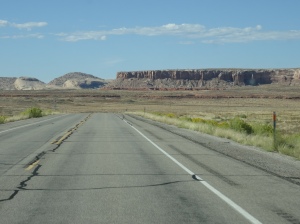 Utah also has a distinct way of defining a motorist’s responsibility toward wildlife. Apparently, you don’t have to worry about deer [or whatever else might be identified by the sign, as “deer” isn’t the only option] in anyone else’s lane: 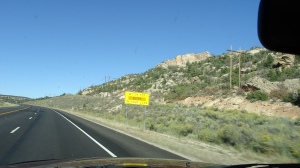 One of the more-distinctive rock formations on the way to Moab is this beehive-shaped rock. There’s an opening at the bottom, but since there’s a fence between the rock and US 191, I wasn’t able to get near enough to explore. I thought this rock might have been part of the genesis for the state motto – “The Beehive State” – but I was wrong. It refers to the honeybee’s industriousness. 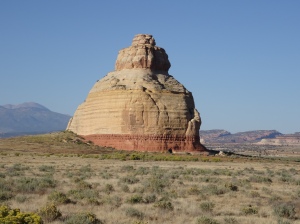 I arrived in Moab in the early evening, checked into the motel, met Eve and Rick, and then the three of us went to dinner at The Moab Brewery. They have delicious food and I recommend it highly.

Friday, Sept. 25, was a day to get things squared away for the canoe trip. The first few times I did this trip with Toni, we and whoever was going with us all arrived on Day One and we started the river trip on Day Two. That ultimately proved unworkable, as it meant that everyone was up late at night sorting, packing, rearranging, repacking, etc., and not getting enough sleep. So after a few years, we shifted to a different plan that had everyone arrive on Day One, sort/pack/relax on Day Two, and start the river trip on Day Three. Eve, Rick and I followed this plan last month. In addition to removing stress from the trip schedule, it allowed us to wander around town for a bit.

One of the places we went to was a rock shop at the northern end of town. I don’t recall the shop’s name right now, but it has everything from huge dinosaur bones (some for display only and some for sale) and petrified wood pieces to geodes to fossilized sand dollars, and lots lots lots more. Here’s a representative shot of the shop’s interior: 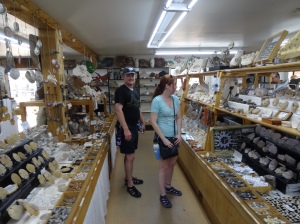 We also visited the Moab Museum, which was chock-full of neat things, from a VERY complete dinosaur skeleton that was found in the area 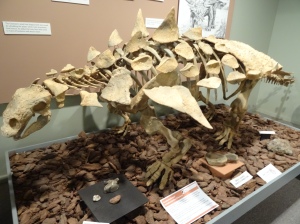 to an area relief map that’s to scale (note: the elevation is exaggerated relative to north-south and east-west, but the actual elevations are in scale to each other) and was carved from who-knows-how-many sheets of balsa wood 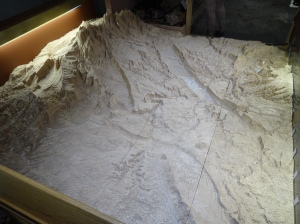 to an actual “Chipmunk Crusher.” The chipmunks must have been ferocious, once upon a time… 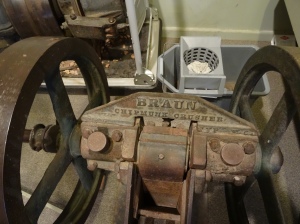 And what town would be complete without its own version of Tow Mater (from the movie “Cars”)? 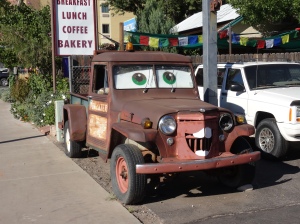 After a day of sightseeing and provisioning, we retired (relatively) early so we would be ready for the River Trip itself the next morning.

There’s more to come, so don’t wander off. If you’re interested in seeing the uncurated collection of photos from this trip, go here. It’s set up for public viewing, so you shouldn’t have any trouble.