It was a bit chilly last night, and I was glad I brought along my “real” sleeping bag in addition to my fleece liner. I was also glad to have a jacket with me, as we arose before the sun reached the sand bar and began warming us up.

After a warm breakfast (many thanks to Rick, who did an amazing job as chef on the trip!), we donned Camelbaks and sandals and headed off to see the sights. Our first destination was what remains of a river-runner’s cabin. I don’t know the detailed history of this particular cabin, but my semi-educated guess is that the resident(s) knew at least a section of the river quite well and would guide the river traffic around the shallows, snags, and sandbars. I’ve visited this cabin several times. The first time was in 2008 with Toni and her brothers; the last time (so far) was this year. Here are comparison shots of the cabin:

I don’t know whether the porch collapsed from age and fragility, or if it was destroyed by vandals, but either way, the roof fell down.

Our next stop was at the lookout tower from which Fort Bottom takes its name. According to the National Park Service, the tower was built about 1,000 years ago. It provides an excellent vantage point from which to watch both up- and downriver, as well as the footpath that now approaches it from the east and the White Rim Road. If this tower is occupied, ain’t NOBODY gonna sneak up on it! 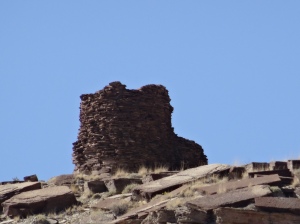 The walk from the sandbar to the tower isn’t very long, but the last 50 or so vertical feet are fairly strenuous, including a bit of a climb at the very end to get to the top. Although we wore (very good) sandals, I would recommend at least tennis shoes for anyone wanting to visit the tower.

After we had enjoyed the view and the tower and the quiet, we returned to our campsite, packed the canoes, and shoved off to paddle the next ten miles of the Green. Our destination was Anderson Bottom, at Mile 31. Here, Eve and Rick are enjoying the water about a mile and a half downriver from our campsite. The tower is (barely) visible, if you know where to look, at the top of the low mound at the center-right of the photo.

To help you find it, here’s a telephoto closeup:

I’m going to go off on a tangent for a moment. I’ve been down this river a total of 7 times over the past 8 years, and because of that I didn’t take as many photos this year as I did the first (or second, or third, or…) time. But I’m finding it really difficult to pick just a few from each day’s batch to share – I want to share ALL of them, and not just from 2015, either! I want to share all of my photos from all 8 of my trips, because this is such a fantastic place to see. This year also taught me that I still have things to learn about the Green. For example, Rick pointed out a cliff ruin that I had never seen before, even though it’s fairly close to one I’ve looked at on each previous trip. Also, he found a rock with preserved dinosaur tracks in it, after Toni and I had looked in vain three years ago. And the most important lesson of all, I think, is that bringing new people to the river gives me a chance to see the sights through their eyes. The whole river is awesome and – dare I say it? – majestic. Everywhere you look, it seems like a perfect photograph is right there. And then you float another 50 or 100 yards, and look at the same places, and the minor change in angle, or distance, or juxtaposition of rocks, or whatever, makes it look all brand new again.

Okay, my philosophical musings are done. Back to the travelogue. 🙂

This next photo is not only beautiful in its own right, but is also significant for the white rock layer that’s at river level. That layer is called the White Rim Formation. By the time we get to the Colorado, that will be 700 – 1000 feet or more above the river level. Since I happen to know that the river doesn’t *drop* 700 feet in 40 miles, that means there’s a definite tilt to the layers of rock. Just try to imagine how much other rock had to be worn away to get down to this layer (hint: a gob), and how much more rock lies below here, waiting to be exposed. 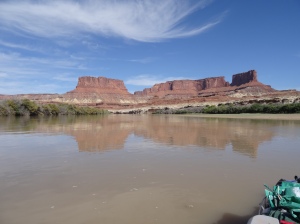 We reached Anderson Bottom in mid-afternoon, and after beaching the canoes on the local sandbar, we decided to take in the sights the same day, rather than in the morning. So we walked from the sandbar over to the Bottom itself (it used to be a ranch / homestead, from whence the name originated) and then climbed a sand dune to go see the petroglyphs. They’re not in a *totally* inaccessible spot, but it certainly isn’t easy to get to their level, either. I doubt that anyone tries, these days, and that’s good because it protects them from damage-by-human.

Anderson Bottom is actually an old bend in the river. Geologically recently, the river cut through the rock at its narrow point and shortened its course by 2 or 3 miles. When I soloed this trip in 2013, I hiked the entire bend. It’s interesting, but the course change was long enough ago that there are no obvious marks of where the riverbed was within the canyon. I’m sure they could be found with ground-penetrating radar, though.

The other feature of Anderson Bottom is the spring. I think it was originally a seep from the canyon wall, but at some point someone actually cut a hole into the rock wall, about 20 feet up from the canyon floor, and then hollowed out a basin to capture the water. The spring still flows, and some of the old piping is still visible. If you climb up to the basin, you can actually soak in the spring – if you want to.

Because the petroglyphs and the spring are on opposite walls of the canyon (albeit in the same arm of the cutoff), it took us a while to get from one to the other. In fact, because we ended up bushwhacking our way across the Bottom, it took longer than we had anticipated. As a result, we were rather rushed when we got back to camp, but we managed to set up the tents, cook and eat dinner (thanks again, Rick!), clean up afterward, and settle down to a nice campfire – all before the Blood Moon rose over the canyon rim. By that time the lunar eclipse was already under way, so we just sat back and watched the celestial show. 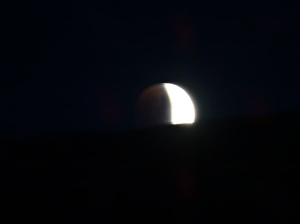 The eclipse was so amazing, and I took so many photos of it, that it deserves its own supplemental blog post. To see all my photos from this trip, go here.

2 Comments on “Moab, the Green River, and Canoes (Part Three)”