October 26, 2016, dawned clear – as did all our days on the trip. There was no need to pack our gear this morning, though, because we weren’t going anywhere. Instead, today involved a couple of “expeditions.” The first one was to a sea lion encampment (rookery?nest? whatever the place where a bunch of sea lions live is called) where we were given the opportunity to snorkel with them! Regrettably, my camera isn’t waterproof and I don’t have a watertight case for it, so I don’t have any great photos (or even any lousy ones!) of anyone swimming with the sea lions. Rest assured, though, we did. They were quite playful and inquisitive, even to the point of trying to nibble our flippers, fingers, or anything else they could get their mouths around. But just like friendly puppies, they never bit hard. They were just using one of their standard methods of getting information from their surroundings. These were some of our playmates. 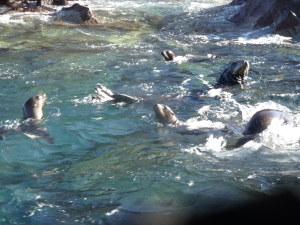 I found out something interesting about myself today, too: I get seasick while snorkeling. (ergh…) I think it might have something to do with my nearsightedness, because I can’t wear my glasses while swimming and I don’t have contact lenses. I know I missed a lot of beautiful fish and other great underwater sights because of that, and I suspect that not being able to see anything clearly may have contributed to the nausea. *sigh* I’m told that it’s possible to get prescription diving/snorkeling masks, so I may look into that … eventually.

After our playdate with the sea lions, we motored (panga’d?) back to our campsite for lunch. As usual, the crew laid out an impressive, and delectable, spread for us. They really know how to treat their guests right!

Lunch over, we took off in a different direction for the afternoon – instead of being on the water, we walked inland (if you can do such a thing on an island) along a well-marked trail. It turns out that the cove we were staying in had been used at one point by a Mexican Army garrison, and they had dug a well. This well is still viable today, and we all took turns getting ourselves soaked by buckets of cold, (almost-) fresh water. 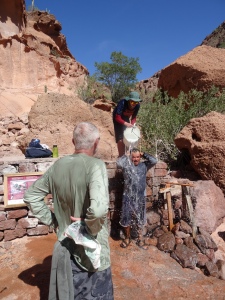 After refreshing ourselves, we walked the rest of the trail (one of the crewmembers rated it a “2” on a [presumed] scale of 1 to 10), past fig trees and other plants growing in the oddest places. The tree on the left originally took root – I think – at the top of the cliff, and then the taproot just kept growing down until it found somewhere to dig in. The small one on the right hasn’t quite gotten to that point. 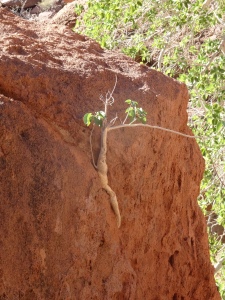 We also walked past fantastic erosion-created vistas and got our first taste of fresh pitahaya! (Pitahaya is the name for both a cactus and its fruit. We ate the fruit, which tasted sort of like watermelon, and not the cactus.)

At the end of the trail was a perfectly-framed view back to the cove and the beach where we camped. 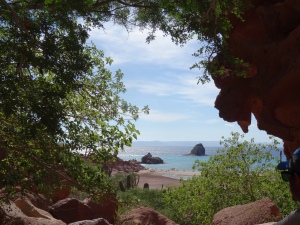 Our “hike” didn’t take all that long, which left us with plenty of time for floating in the water, paddleboarding, or other leisurely pursuits (most of which involved doing a lot of nothing). At bedtime we simply crawled into tents that were already up, with gear that was already unpacked. 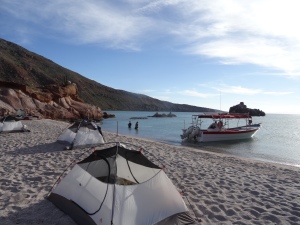 And so ended Day Three of the Great Baja California Sea Kayak Vacation!