The Big Day! Saturday morning was another lazy time for me (I seem to do that a lot these days…), but I finally roused myself and went off to meet everyone in the lobby of the Nittany Lion Inn so we could decide where to take our “official” photos. We had agreed to meet there at 1:45, which would give us time to get all the pictures we wanted and then get over to Wagner Building for the guided tour of the Detachment spaces.

OH. MY. GOSH. A cold snap had taken over! Friday’s temperatures had been seasonal, and Sunday’s were again supposed to be seasonal (highs in the 40s somewhere), but Saturday? I don’t think it ever got above freezing! And windy. GAH!

But we decided to take pictures at the Nittany Lion Shrine anyway, because We Are! First, just the alumni: 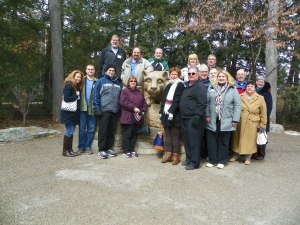 I also have photos of each couple, and a picture of my two roomies (Fred & John) and me, but all those would make this post way too long. You can see them on my Flickr account, or in an album on my Facebook page, or through the Honor Guard alumni group on Facebook.

The photos actually took longer than we anticipated, because others who were as stubborn as we were also wanted to take photos. So we took our group shots and then stepped out of the way to let some others get their shots. One of the “others” was another group, and we anticipated that we’d sort of alternate back and forth – but no, they took their whole-group shot, and then another, and then a WHOLE BUNCH OF INDIVIDUAL SHOTS without letting anyone else have a chance. So finally we broke back in, got our couples shots out of the way as quickly as we could, and left for Wagner Building.

We were met in the main-stairwell lobby by two Honor Guard women who had not been able to go to RPI with the rest of the team. Cadets Jasko and McEwen were very professional, poised, and courteous, and they willingly answered all our questions. They took us through the Detachment area first, where we saw (among other things) the room where photos of visiting bigwigs are hung, a display honoring Detachment alumni killed in action, the POC cadet area, the cadet supply room, and (of course!) the Honor Guard space.

Here we enter the inner sanctum:

Ray Benedetto (’72) came back in the early 90s as a guest lecturer / speaker.

Fred Bauer, John Herdman, Nelson Beard, Dave Staib and Grant Leljedal inspect one of the rifles. It was decided that the rifles had a better overall spinning balance with the 16-inch bayonets than without. 🙂

The more things change, the more they stay the same. Today’s cadets have different uniforms than we had in the early ’70s, but beyond that, the cadet supply area looked *very* familiar.

After our tour, some of us went over to the Creamery for a Penn State treat – ICE CREAM! The Creamery is apparently *always* packed. I was surprised at how full it was, given that the temperature outside was several degrees below freezing and the wind was blowing. But when you’re on campus, you just GOTTA have Creamery ice cream! 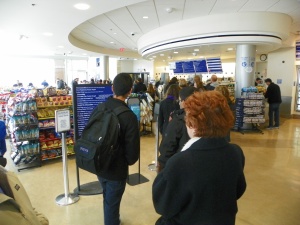 Being the decisive (and frugal!) person I am, I only bought two bowls of ice cream – Rum Raisin and Mint Nittany. I *wanted* to also get Death by Chocolate, Egg Nog, and about a half-dozen other flavors – but I restrained myself. I can feel my resolve fading, though, and I might actually break down and order some for home delivery (yes, they’ll ship it to you).

This ceremonial ice cream scoop hangs on the wall in the Creamery. I think I need one of my own. 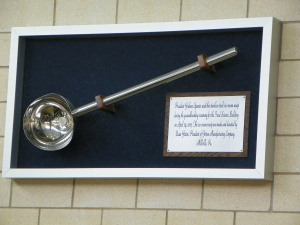 After the ice cream break, we went back to our respective rooms to rest up for the evening’s festivities. Stay tuned.