The Cadillac Ranch – and Other Sights

There are simply too many museums and tourist attractions on Route 66. So far I have counted three (three!) “Route 66 Museums” – one each in New Mexico, Texas and Oklahoma. Naturally, I had to stop in at all three…

But there are other museums, too, that I have had to skip due to time constraints. There is the Roger Miller Museum and the 100th Meridian Museum in Erick, OK (Roger was born there); the Astronaut Thomas P. Stafford Museum and Heartland Museum in Weatherford; *another* Route 66 Museum in Clinton; and the list goes on and on.

There’s also the Cadillac Ranch, which is a sculpture (?) of old Cadillac hulks buried nose-down in the ground just outside Amarillo. I stopped there to take a gander: 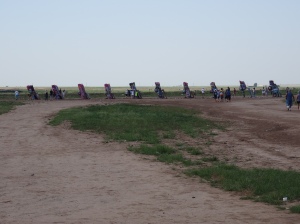 It’s interactive – everyone who comes can paint what they want, and they leave the empty spray cans when they’re done 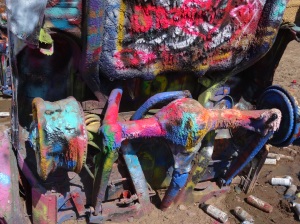 The paint is so thick it’s creating stalactites. 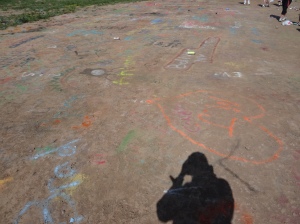 They even paint the ground!

Several people have done songs about “The Cadillac Ranch,” among them Bruce Springsteen and Chris LeDoux. I know nothing about either of them 😉

I noticed something interesting about many of the overpasses I went under – of course they spanned both the Interstate and the frontage road, but there was also a span over … nothing. And it was the highest clearance of the whole overpass. I finally noticed on my Texas map that there was a comment about “the original Route 66 following the extinct CRI&P railroad.” The bridges were definitely newer than the 30s or 40s, so I had to look it up. It turns out that CRI&P is Chicago, Rock Island and Pacific – one of the railroads that went belly-up in the 70s and 80s during all the railroad mergers and restructurings. They abandoned 7000 miles of track, most (some?) of which were eventually pulled up. But the roadbed still exists in lots of places, and of course nobody was going to rebuild a bridge just because what it went over isn’t there any more. As I rode through Amarillo yesterday, I saw a couple of RR bridges that said “Rock Island Line” on them. Here’s another shot of an abandoned roadbed:

No tracks any more, but the old cut is still there

Another thing I wondered about, in Oklahoma, is why the directions have you zigzagging so much under / over the freeway. I finally figured out as I came over a rise and saw that 66, if it had gone through, would have cut across I-40 and continued on the other side. Sure enough, the directions had me cross a bridge and continue on that piece of pavement. Much of 66 in OK is the actual, original, concrete road, complete with expansion joints every couple hundred feet (it seemed like 40 feet!). So the instructions have you hopscotch from side to side of I-40 so you can ride on the actual Route 66 pavement. 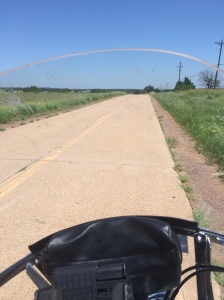 In some places, the pavement still has the original rolled curb, too. 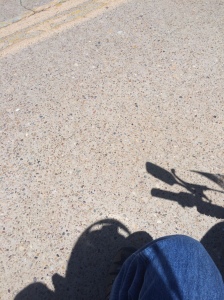 And there is a whole section of Route 66 that was four-laned at one point, but now that the traffic load is so much less the authorities have abandoned the original (westbound) lanes and are only maintaining the newer (eastbound, now bidirectional) lanes. It was really interesting to see how nature is reclaiming the older roadway.

“Road Closed” – but still there

I could go on and on, but it’s time for me to saddle up and head east again. Until tomorrow. 😀

← Amarillo by Evenin’
Barns and Gas Stations and Totem Poles – Oh, My! →

2 Comments on “The Cadillac Ranch – and Other Sights”